Mid-side recording is a familiar technique to most sound recordists: a coincident stereo pair that is flexible and handy (not least as it can fit in a blimp or windjammer more easily than most pairs). I’ve written previous posts about my mid-side rigs, both for LDC mics and SDC mics. Double mid-side, where the fig 8 side mic is used by two mid mics – one facing forward and one facing backwards – is less used, but still well known, mainly by those recording surround sound. But, of course, the fig 8 side mic can also be shared with two (roughly) forward-facing mid mics: say one pointing up to the mouth of a singer-songwriter and one down to their guitar. Matrix the two mid-side pairs and you have stereo for both vocal and guitar, with reasonably little spill, and – with all three mics coincident – no phasing issues. Hugh Robjohns wrote an article for Sound On Sound about this use a few years back.

But there is another use for double mid-side with the two mid mics facing forward, and one that is rarely used or described: that’s where the two mid mics are pointing the same way but have different polar patterns. Using, say, omni and hypercardioid mid mics, you can matrix either with the side mic and get omni or hypercardioid mid side or matrix both and mix and you can get all the polar patterns in between for your mid mic: say, wide cardioid or cardioid as well as the omni and hypercardioid. This flexibility in polar pattern is quite separate from the familiar aspect of mid-side recordings, where you can vary the width of the stereo image by changing the proportion of mid to side mic: with this arrangement you get both stereo width and polar pattern flexibility in post, and – if using SDC mics – all with a very compact three-channel rig. As you can see, with a few Rycote back-to-back clips you can even fit it in a fairly standard 100mm diameter blimp.

Here’s a vocal test with a group (Norfolk’s raucous folk band, Rattlebox) arranged in a semi-circle around the mics outside on a very windy day (about 20 mph wind), singing Dick Shannon’s ‘The Auld Triangle’: the test was in part to see if the mics would be OK stacked in a standard (in this case Rode) blimp in reasonable wind (the top and bottom mics were nearer to the edge of the blimp than is ideal: at this stage I hadn’t come up with the more compact triangular array). The configuration needs the fig 8 centrally, which is good as fig 8 mics are the most sensitive to wind. The three mics had their 75Hz low-cut filters engaged to counter the wind noise. I matrixed, or decoded, each mid-side pair, so in the video you hear these on their own and then mixed 50:50. In the video, I call this mix of the two pairs a ‘virtual cardioid mid mic’) as it isn’t far off mid side with a cardioid mid mic: of course, a seamless range of possibilities from omni to hypercardioid is possible.

And here’s another test, this time with a guitarist (Luke Chapman) in his workshop (by day Luke is a woodcarver), with the same matrixing/decoding options. With no wind to contend with, the three mics have no low-cut filters engaged. Of course, the smaller sound source of a guitar means the changes in mid-mic polar pattern are fairly subtle.

A bit of maths shows the first two are identical:

Decoding one mid-side pair then adding the M2 mic (centrally) to the stereo pair, however, gives a different result (as, indeed, you might conclude intuitively when thinking about it):
L = μ(M1+S)+ λM2
= μM1 + λM2+μS

So avoid this third option.

[NB I’ve just done the L channels in the second and third examples, to reduce the off-putting maths…]

In my case, I’ve gone for the second option as it is difficult to determine what mix of mid mics you might want – i.e. what mid-mic virtual polar pattern – without hearing the stereo sound. I must now set up my DAW (Reaper) so that raising one stereo channel reduces the other by the same amount to make assessing the balance/mix easier.

In terms of monitoring when recording you can either just listen to the channels in mono or, with any reasonable recorder, send two of the channels (the fig 8 and, say, the hypercardioid) to be decoded in the headphone monitoring or in the LR mix (either are possible on my Sound Devices MixPre-3): in this way you get confirmation that at least one of the stereo pairs sounds as you want it. With time on your hands, you can, of course, check the other pair in LR stereo too.

UPDATE (9.11.2021). By request I’ve recorded some ambiences (just my quiet Norfolk village street from my garden) with this rig and have uploaded the iso tracks (AKG CK92 omni; AKG CK93 hypercardioid; and AKG CK94 fig 8), the two separate MS recordings (as LR stereo) and the combined MMS recording (giving something akin to cardioid MS). These recordings were made with my modified array (i.e. the mics set in a more compact triangular arrangement, each only 5mm apart from the others). 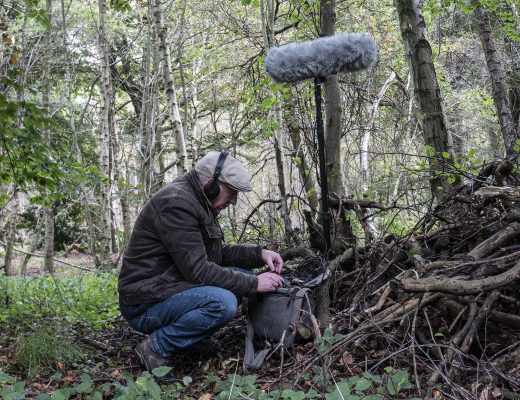 Field recording with the Rycote HC-15 and HC-22 mics 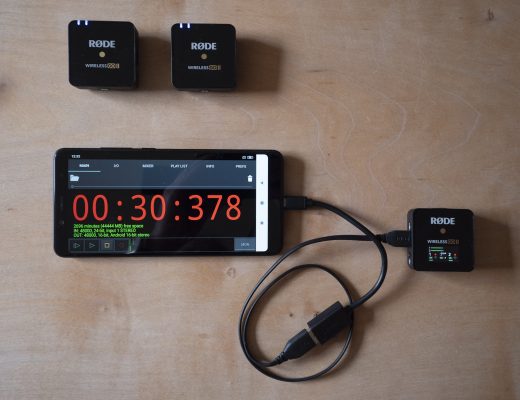 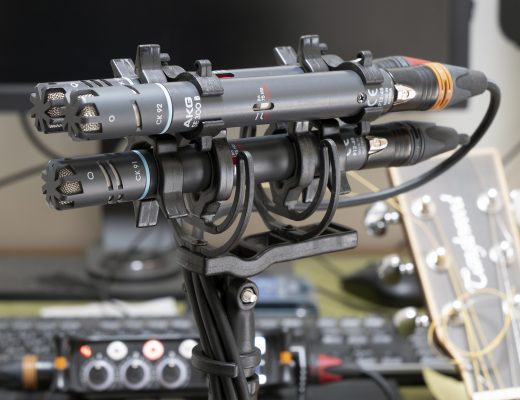