I’ve had one of the AKG Blueline mics for years. This has the CK93 capsule, which is an excellent mid-price hypercardioid SDC mic that has proved great for booming indoor (and, on occasion, outdoor) dialogue. I have also used it for music recording where I needed a narrower polar pattern than cardioid. It is leagues above my Oktava MK012 hypercardioid – so beloved by indie filmmakers – in terms of build quality, handling noise, and features (having low-cut and attenuation switches).

From time to time I’ve wondered about the other interchangeable capsules in the Blueline range and, above all, about the CK94 – the figure of eight capsule. Of course LDC multi-pattern mics include a fig 8 polar pattern and, paired with another mic, this allows mid-side recording, which I have done many a time. And, as I have posted, with a massive DIY blimp I have even got such an LDC pair outside for field recording. That said, it would be useful and, for most uses, more practical to have a compact SDC mid-side pair. The standard for field-recording pros is the Sennheiser MKH30, which, while excellent and with the advantage of humidity-beating RF technology, has the distinct disadvantage of cost: it has a street price of around £1500, and even used ones seem rare below £1000. Add another Sennheiser MKH mic (say an MKH40) and wind protection to fit and you will need to spend £3000 or more. Unlike other polar patterns, SDC fig 8s are rare, and there are few more affordable ones: ignoring the clunky pseudo fig 8s made by Oktava and Kortwich (made using two cardioids mounted back-to-back, giving a T-shaped mic), the only affordable true single -diaphragm fig 8 other than the AKG CK94 is the Ambient ATE208 Emesser. The latter, however, has a lot of bass roll-off due to it being tailored to match the off-axis response of a shotgun mic (its intended partner). Recently, boutique Taiwanese mic-maker B9Audio has produced the CM180, but it is only available direct from the maker: so this means significant shipping and duty costs need to be added to the US$749 price. Reviews are also thin on the ground to say the least.

So, with all this in mind, the AKG CK94 remains the most viable affordable SDC fig 8 for general usage (i.e. music as well as film sound). Although now out of production (AKG/Harman/Samsung appear to be phasing out the whole Blueline family and the CK94 was the first to be discontinued), at the time of writing it is just possible to find one or two new examples for sale: with the SE 300B amplifier/mic body, street price is around £600. But I’ve been keeping my eye on the used market, and was please to spot one on the Saturn Sound website (where there is a list for a grand closing down sale of mics – with some very rare examples), and – together with the SE300B amplifier/mic body – the other day I became the owner of a very good condition example: indeed, during a pre-sales check, Ashley Styles of Saturn Sound thought the capsule a bit noisy and replaced it with one he still had. All this, plus delivery in person (he has retired not so far away), for a remarkably affordable £200.

I had no concerns about the CK94 for music or louder effects recording, but, with 22dBA self-noise (a long way from the MKH30’s 13dBA) my hopes were low for recording quieter ambiences. So I was surprised how good it sounded during an initial test recording the ambient noise in the garden (in a village in rural Norfolk). You can have listen here:

I was expecting something much noisier.

In terms of rigging it up for field recording, I purchased a couple of the older style (i.e. lower profile) back-to-back clips made by Rycote (ref. no. 048460), which, unlike the new fit-any-mic clips Rycote make for MS pairs, neatly fit into a Rode Mk1 blimp and have lugs to attach to the suspension bands: the mics sit centrally and with a healthy blimp diameter of 100mm there is still plenty of air space around both mics. The CK94 has to project further forward given the location of its capsule (the centres of the two capsules should align, of course). I’ve added a DIY conn box equivalent (a clamp for the two thin cables – Sommer Cicada – that go from the mics to the DIY boompole-top XLR holder) to avoid the two heavier cables entering the blimp, so I’m there with a very nice sounding SDC mid-side rig for a very modest outlay. And, of course, I can use the AKG C94 with mid-mics other than the hypercardioid CK93: for example, my Rode NT55 mics give me cardioid and omni mid-mic options. I’ll post other recordings – including music – with the CK94-based mid-side rig in due course. 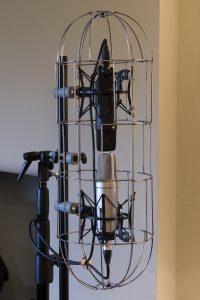 Sometimes, however impractical it seems, it is useful or at least tempting to get a low-noise large-diaphragm condenser (LDC) microphone pair outside. Various set-ups have been tried over the years by nature recordists, often taking advantage of a pair of the affordable and low-noise Rode NT1a mics. I have been particularly impressed by Magnús Bergsson’s recordings with NT1a mics, not least as he often runs these in parallel to Sennheiser MKH20, 30, 40, 8020 and 8040 mics: see his website at HLJODMYND – SOUNDIMAGE.

For use when I need lower self-noise than provided by my usual small-diaphragm condenser (SDC) options, I wanted a mid-side pair of LDC mics (i.e. a coincident stereo pair comprising a figure-of-8 mic for the sides and, in this case, a forward facing cardioid mic), so having a Rode NT1 (the more neutral successor to the NT1a: 4dBA) and a Rode NT2a (7dBA) to hand I have put together an oversize windshield or blimp for a vertical mid-side set up.

For better stiffness than the usual plastic, I have gone for TIG-welded stainless-steel wire (2mm diameter), with the blimp cage incorporating (isolated) spigots to fit a Manfrotto 154 stereo bar. The blimp disassembles into two halves, but, in reality, I just leave it assembled and insert the mics through the spaces in the cage. For the covering, I have gone for Rycote’s red lining cloth and Rycote long fur (all supplied by the metre direct from Rycote: amazingly helpful people there), with the usual elasticated drawstring tightly closing the side opening. The cage was built to my design by a friend of mine, who works with stainless steel wire for rolling-ball sculptures – all for a few pints of beer – and the fur covering was made by another friend with professional sewing skills. 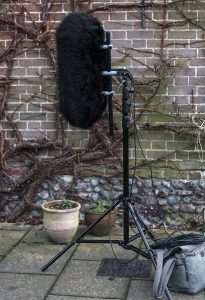 Initial testing met expectations, not least with the better windnoise attenuation resulting from a larger diameter windshield than those usually designed with necessary compromises for boom-pole use: it’s the distance from the sound generating surface (the outer side of the blimp) that matters, with the inverse-square law applying.

Needless to say, I am by no means claiming this as a sensible/feasible option for most usage (and I have much more practical alternatives for most projects): it is heavy and I wouldn’t want to carry it and its stand (I use a Manfrotto 1004BAC) more than half a mile or so. There are, of course, many lighter, more robust and less humidity-sensitive microphone solutions that will be preferable for most projects (e.g. a Sennheiser MKH 30/40 pair).

However, this DIY approach might be of interest to anyone else was thinking along similar lines with LDCs (and there is no need to be afraid of getting large studio mics outdoors): LDC mid-side arrays are feasible for such use and it makes good sense to consider (affordable) purpose-built windshields as alternatives to shoe-horning LDC mics into undersized windshields or adaptation of less than ideal items from the local DIY store!

In action, recording musicians in the grounds of Mannington Hall 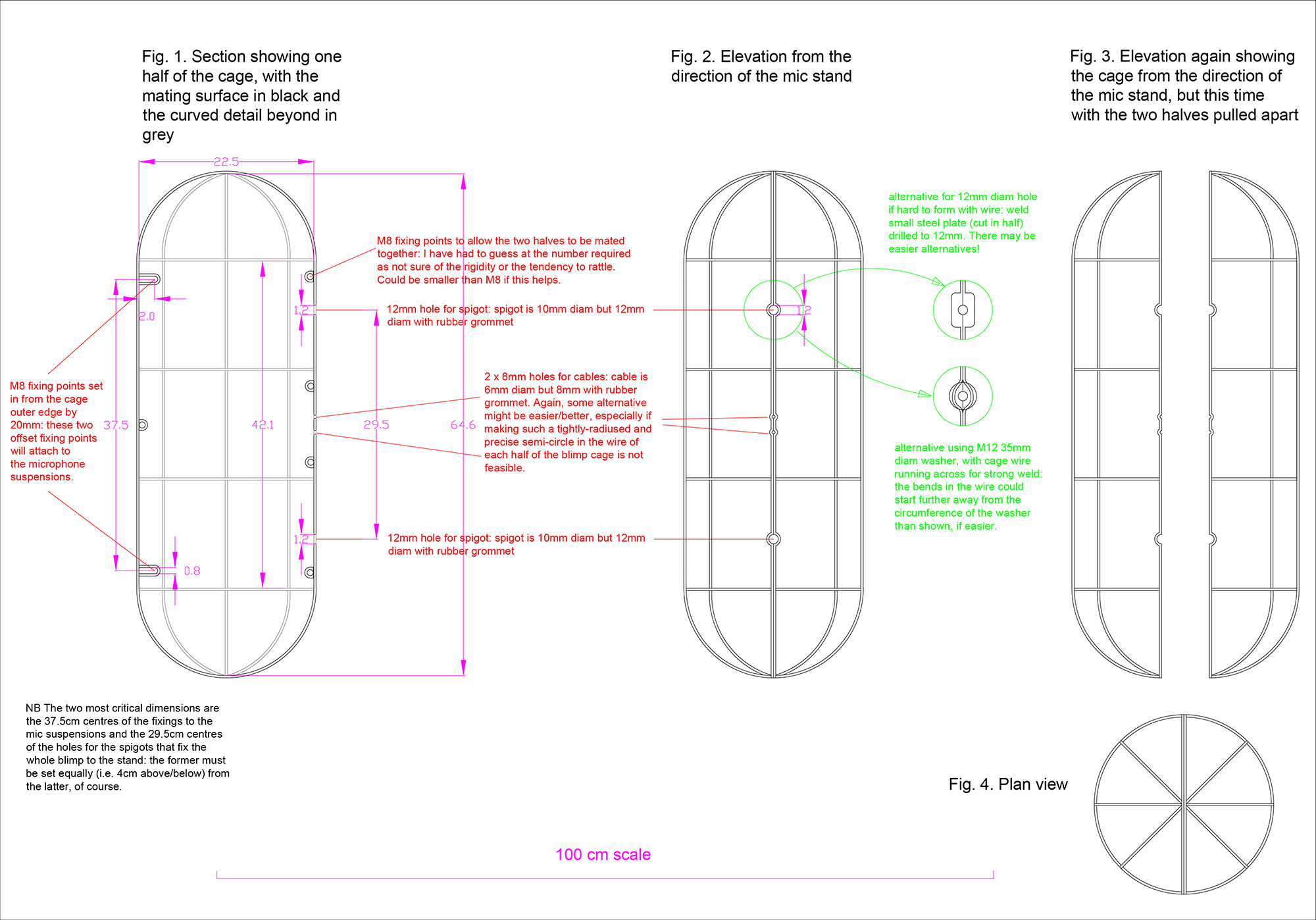 And for anyone really keen, here’s my design