Following on from part one of my tests and review of Rycote’s new mics, it’s now time – in part two – to turn attention to their new omni mic: the OM-08. A pair of these arrived from the folks at Stroud a bit after the cardioid mic (CA-08) and the supercardioid mic (SC-08), hence the separate blog post. Much of what I said about the cardioid and supercardioid mics applies equally to the omni mics: again the specs of the OM-08 can be read on the manufacturer’s website; physically they are pretty much identical (although, being omni they lack the slots to the rear of the diaphragm); ditto for handling noise and RFI (excellent in both cases); and, as you’d expect with an omni, the OM-08 fares still better with wind. Self-noise is also excellent at 11dBA (compared to the 12dBA for the supercardioid mic and 13dBA for the cardioid mic): and, again, this figure seems to be spot on. So what’s left to test with the third of the new mic models? Plenty still, fortunately, so here goes:

A bit of music

First up, I headed down to visit guitarist Luke Chapman in his workshop (by day Luke is a woodcarver) to make a series of tests. The first one is comparative: it alternates between a pair of the Rycote omni OM-08 mics and a pair of Rode NT55 mics (with the omni capsules: that is, the NT45-O capsules, which sound a lot nicer than the cardioid capsules – indeed, the omni capsule is even rated by such luminaries as Tony Faulkner). The second test sets a single OM-08 to record the guitar, then compares it to progressively narrower-patterned Rycote mics (the cardioid, supercardioid and shotgun mics) with the distance increased proportionally to reflect the polar patterns of each. And the third test is just a longer clip of an OM-08 pair on the guitar. As expected, and this is no disrespect to the omni capsule of the NT55, the Rycote OM-08 holds up well to my ears; and the OM-08 matches well with the other Rycotes.

For those of you wanting a musical comparison with a higher-end mic and, indeed, without the audio compression that comes with YouTube, it’s on now to some WAV files of tests of a church organ. With Norwich Cathedral organ (my easiest to access test instrument) currently in pieces at Harrison & Harrison’s workshop in Durham, I thought about local parish churches nearby and remembered that Heydon church organ (a Wordsworth and Maskell instrument from 1883) has just been restored, so with the permission of the incumbent, I headed off with old friend and organ recordist Jake Purches of Base2 Music for a bit of testing. Jake brought a pair of his Sennheiser MKH 8020 omni mics along for comparative purposes. Five such omnis form the core of Jake’s rig for his recordings of the likes of organists Jean-Paul Imbert, Darius Battawalla and Wayne Marshall and they provide a sterner comparison than the Rode NT55 mics: and, of course, Jake is a tougher critic of the mics on such a source.

Amongst the various bits of playing of the Heydon organ, I think this simple test (running down to C1 at 32Hz) is more instructive than, say, a snippet of Bach:

Again, the Rycotes held up well in the comparative test (crucially in their low colouration, which seemed as low as that of the MKH 8020 mics), and it was revealing that after this and other tests over a couple of days, Jake is now keen to add a pair to his collection for organ recording.

Omni mics, of course, lend themselves to field recording of ambiences as much as to music recording, so, with that in mind, I stuck a pair in blimps alongside the Sennheiser MKH 8020 mics again: the spacing was 62cm. Here, from the front garden in my ostensibly quiet Norfolk village is a bit of Sunday afternoon late November ambience: cars passing, people walking and jogging by (OK, that was me), someone playing an electric guitar in the distance, plus the odd bird that forgot to migrate to somewhere more appealing.

Again, no obvious lack on the Rycote omni mic recording – at least to my ears. I recorded the street ambience at a higher sample rate than I usually choose (96kHz instead of 48kHz: note Soundcloud seems to limit recordings to 48kHz) to allow comparison of the higher frequency response: the Sennheiser MKH 8000 series mics are known for their extended high end (amongst other attributes) and it is interesting to see how the OM-08 mics handle those frequencies above human hearing.

The spectrograms are revealing: they show the extended high-frequency response of the MKH 8020 with, for example, the gate-shutting sound (that tall spike near the right-hand side of the spectrograms) reaching about 45kHz, compared to about 40kHz on the OM-08 (sorry, it is clearer in Reaper on my PC than in this rather smaller derived image), which is still very respectable. More significantly, perhaps, the spectrograms show the much higher self-noise of the Sennheiser mic at high frequencies: the Rycote mic is consistently low in terms of self-noise up to the top of the graph (around -120dB at 48kHz, vs around -105dB for the Sennheiser MKH 8020). Of course, both mics deliver low self-noise in the human audible range, so this might seem entirely academic outside those recording at high sample rates and pitching down in post (e.g. for bat recordings, or for sound effects): but there are those that argue frequency response over 20kHz is important for high-resolution recording (such as David Blackmer of Earthworks mics in this article). If so minded, there is no doubt that the Rycote omni is a respectable performer over 20kHz, with much lower self-noise a useful benefit of the not quite as far extended high-frequency range. NB, if you are wondering, I checked the cardioid (CA-08) and supercardioid (SC-08) mics alongside the OM-08 (at a sample rate of 192kHz, and using a can of compressed air as a broadband source) finding they have almost identical high-frequency capability: not at all surprising given the common design of the mics.

Anyway, returning from such rarefied matters to another more earthy test: this time yet another street ambience (sorry if the sound of my village street is getting too familiar to you) comparing a Rycote OM-08 omni spaced pair (at 46cm) with the Rycote CA-08 cardioid mics as a NOS pair (i.e. at 90 degrees and 30.5cm spacing). As you would expect, there is a significant difference in the bass response with the omni mics, and, of course, the impact of polar pattern and mic array on a 360 degrees ambience is much more marked than the change of a polar pattern of a mono mic recording a point source (such as in the guitar example earlier in this post): in short, these differences mean it is harder to hear the sonic consistency that is evident across the various Rycote mics.

Mic choices are often made on the basis of cost, habit, familiarity, reputation, and even snobbery as much as by critical (blind) listening of all the options out there, so it is hard for a new manufacturer to establish itself. In this case, Rycote is helped by having such a long-established reputation as a maker of mic windshields and suspensions. The folks at Stroud would hardly risk that reputation on some mediocre mics, but, nonetheless, I have been slightly surprised by how good the mics all sound. As have those others – from professional sound-recording perspectives – who have kindly helped with parts of my testing. Perhaps the surprise is to some degree a consequence of the pricing – significantly below many of the established professional SDC mics made by the likes of Schoeps and Sennheiser. The two parts of these tests, covering the supercardioid, cardioid and, in this second post, the omni mics from Rycote have hopefully provided the reader with an idea of the three new mics. As I said in the conclusions to part one, these mics are a great follow-up to the HC-15 and HC-22 shotgun mics (for which see my initial review and subsequent field recording tests). All five mics merit consideration by anyone planning to buy mics in the mid range to professional categories, especially if low self-noise, a consistent sound across different polar patterns, and, indeed, availability of a range of different polar patterns are desirable. The last point is interesting: I have no inside knowledge of what is planned in terms of any future mics at Rycote, but the closing comment from Steve Phillips (Innovation Manager at Rycote) in a video about the SC-08, CA-08 and OM-08 is a tantalizing ‘I’m sure there is more to come’. Some might hope that means a wide cardioid, but, above all, I’d love to see a fig 8 mic added to the series with decent self-noise and at this price point: that would really round out the family and make the Rycotes even more serious contenders! In the meantime, I’d recommend that you try and give the mics a listen and see what you make of them too. 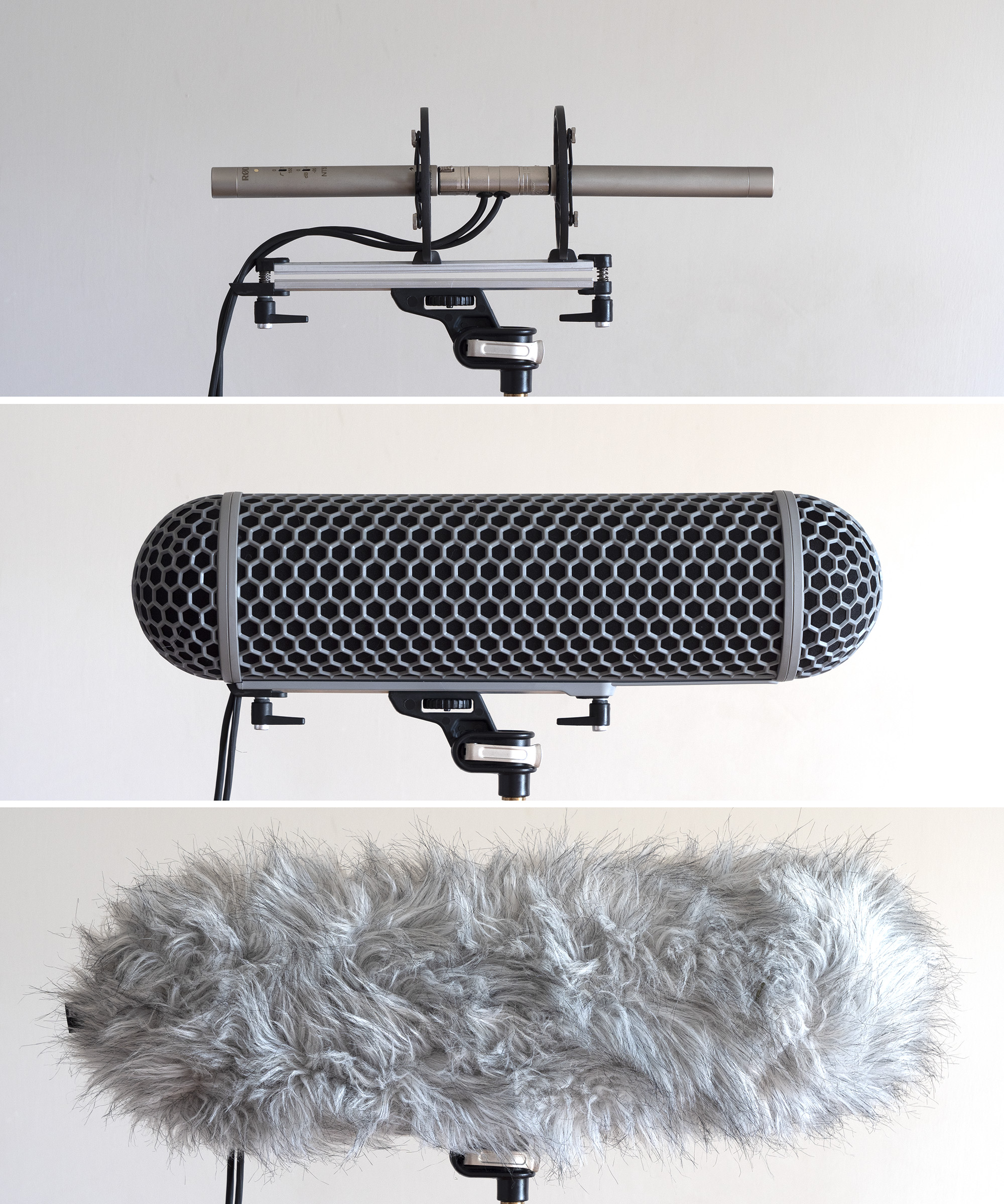 I’m a fan of omni SDC pairs for outside recording. For music I will often use these in Rycote Baby Ball Gags mounted on a stereo bar, itself on a substantial stand (usually the Manfrotto 1004BAC). But where I want something more portable and more windproof, I mount the two omni mics end-to-end inside a single windshield – the Rode blimp Mk1. Joining the two mics end-to-end is easy with a rewired and drilled female-to-female xlr coupler (well, actually, the female-to-female XLR connector is actually not off-the-peg, but made up of three items: two Neutrik NM3FXI and one Neutrik KM. Neutrik’s own female-to-female XLR connector doesn’t unscrew). This places the mics  (a pair of Rode NT55 mics with the excellent NT45-O omni capsules) at a 360mm spacing, which renders a good stereo image and is exactly the ideal length for the Rode blimp (i.e. the same length as the straight part of the blimp). Being pure pressure omni mics there is, of course, no phase issue arising from the fact that they are pointing different directions.

So the end result: a simple robust set up, less fiddly and more portable than common field-recording set-ups for ORTF pairs etc. and – being all enclosed – more windproof. It’s not something I have seen or read about, but I imagine – or hope – others are doing the same. 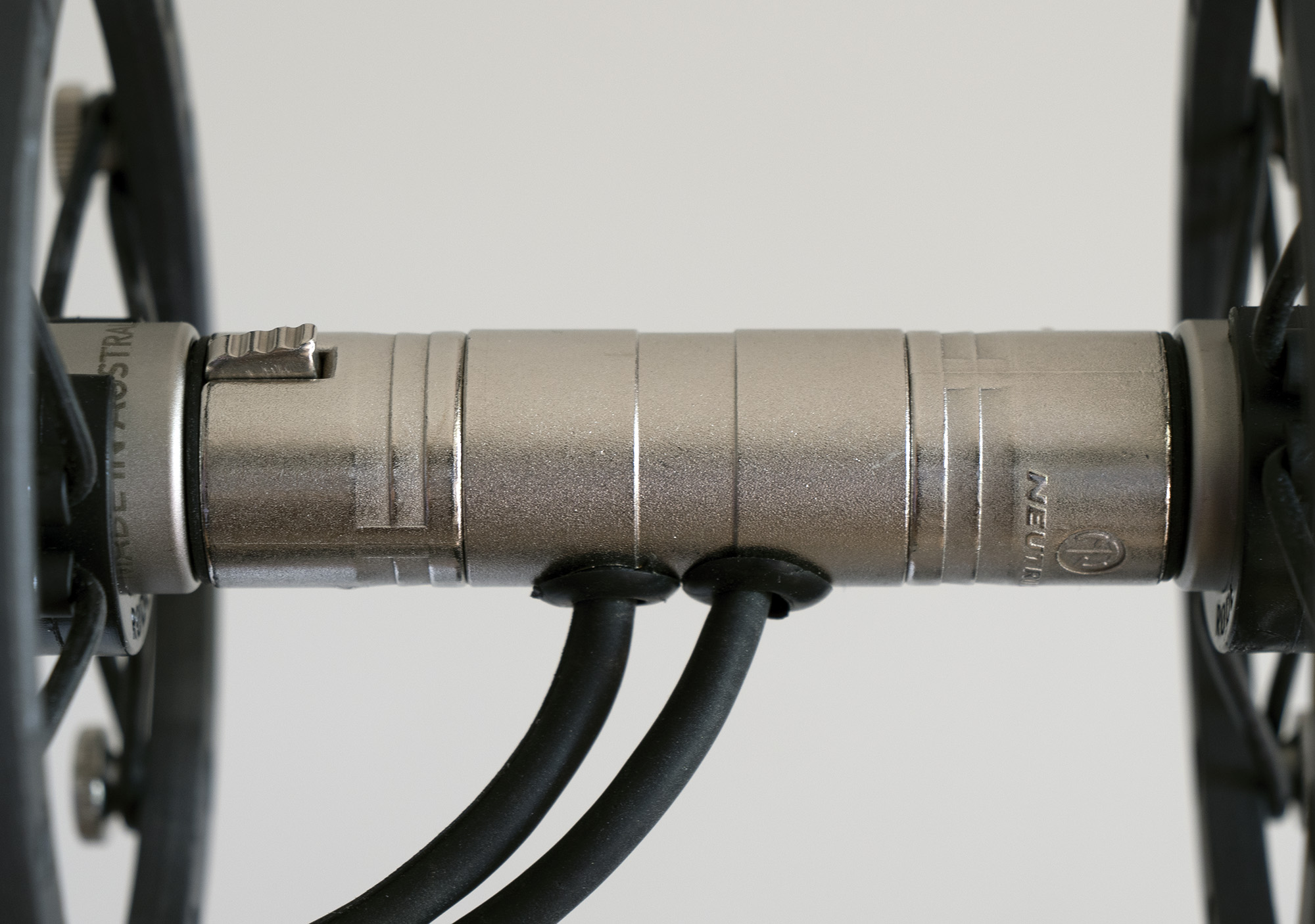 And here’s a detail of the easily modified connector: just drill a couple of holes for the cables.